Believe you can--like a mushroom pro

Watching ball-type sports is not my thing, which is why I am so incredibly lucky to have all three of my kids in gymnastics. I actually enjoy watching it! And during my observation in their classes I have come to learn something that I’ve taken as a life lesson: Starting is everything. Take the mushroom for example; the mushroom is a mat-covered cylinder they use to learn to eventually do the pommel horse. The idea is to put your hands on the top and swing your legs around. (Noah makes it look super easy—but it’s not.)

The thing I’ve noticed is that I can tell, before even a second into their attempt at it, whether they can actually do it or not. Their stance is different. It’s about ability and skill—sure—but it’s also about belief. The ones who know they still can’t even make one full circle around don’t start as if they know they can do it. They don’t hold their hands and body in such a way that would allow for the momentum to make a full swing.  And if a person who has the ability started the same way the beginners do, they wouldn’t be able to make a full swing around either, even though they have the capability, because they wouldn’t have the right momentum. There is a difference when we believe we can.

This is a sign they have in their gym. 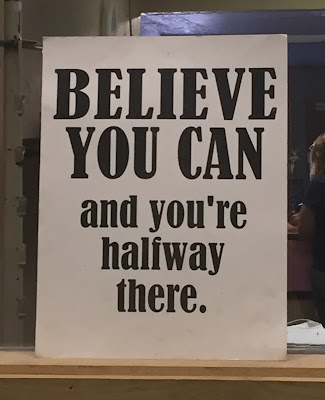 What a difference it would make if we could believe—even if we have never done something before—that we can do it. That we will do it. That it is within our grasp.

We could leap with full faith that we will stick that landing. Maybe it won’t happen the first or the second time but it will happen.

As I am imagining myself going forward with this new perspective another quote comes to mind: “Fake it ‘till you make it.”

It sounds silly but it’s true. Confidence goes such a long way. Compare dance-challenged people (such as myself.) The ones who just throw themselves into it as if nobody is watching, even when they have absolutely no real skill, look so much better than the ones hugging their bodies and swaying from side to side nervously.

Next time you’re faced with a challenge or a new skill you want to acquire remember to square your shoulders and throw it everything you’ve got like a mushroom pro. Believe you can and you're halfway there.

Email ThisBlogThis!Share to TwitterShare to FacebookShare to Pinterest
Labels: Motivational