The healing power of trees--and time.

I'm writing this post to tell you all that I'm okay. For my friends and loved ones who might be wondering and for all of you who are in the midst of a miscarriage, wondering if you're going to feel "this way" forever. I want to be a testament to you that yes, one day, you will heal. That's not to say that I don't still have my moments and my triggers. Just yesterday I was at a church activity where someone brought their adorable little 3 week old baby. I wanted to hold her . . . but I didn't. I haven't held a newborn since my little twins passed away at 15 weeks gestation.

I went home and had a little cry as I was watering my garden. I noticed my big willow tree--which has very deep emotional connections to all things baby-related to me. Early this spring it had split practically in half. I was devastated, thinking we were going to loose it. But my sweet husband, through much man-power and will-power cranked that thing back up with a chain. And guess what? It's alive! And not only alive--to my complete joy and amazement I noticed yesterday that it is sprouting new branches like crazy all over it's "wounds." We had to saw off many of it's branches to make it light enough to lift back up. Wow! I thought. Look how it's trials have made it stronger--more lush and full of even more branches. I held my chin up high and realized that, just like my beloved tree, I have grown stronger too. That's not to say that I don't have my scars, just like my tree, But we have both triumphed over adversary. We are whole, and we are growing, stronger than ever. 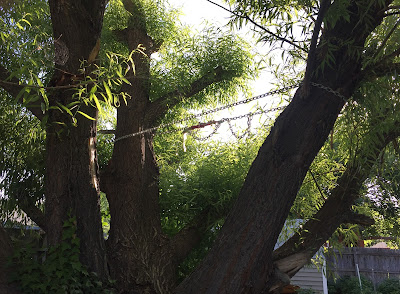 The hammock. however, that used to hang from it's branches, has not met with the same happy fate. That hammock is now in about a million pieces, probably buried under piles of dirt at the landfill. I can laugh about it now but at the time it served as a symbol for me that had to be destroyed. It was the hammock, you see, that I had spent many days swinging in, lying under that branches of that great willow tree, dreaming about Kayla and then Josiah being born. As I was preparing for their natural deliveries it served as my "happy place" that I would later envision and hold onto during my labor. It was one of my favorite places.

Then later, after I had already had one miscarriage after Josiah (and two before him) it was the place I went to as my refuge to pray. I was looking for an answer as to whether we should try again. If there was another little soul out there waiting to come to our family. As it turned out, I got a pretty strong answer that yes--there was. I haven't actually gotten that many answers to prayers that I can definitively look back and say, yes, that was clear answer from God. So . . . . naturally . . .  when we lost the twin girls we later got pregnant with . . . I grew to hate that hammock. Ripping it from the branches of my willow tree and cutting it up into a million pieces was one of the first things I did when I came home from the doctors office when I first learned the devastating news. It was therapeutic and I don't regret my destructive decision. But looking at my big willow tree today, and considering our symbolic relationship, and all the growth we have both undergone, I think it might be time for a new hammock. And that thought fills me with a wealth of joy.

Email ThisBlogThis!Share to TwitterShare to FacebookShare to Pinterest
Labels: miscarriage