Sometimes I have genius ideas. Only I can’t really take credit for these genius ideas because I can tell the difference between the way my mind usually works and the way it works under the influence of inspiration.

Most of my genius ideas have been inspiration. I believe in divine help. I don’t know the how or the why of when it reaches us but I guess I can take credit for occasionally finding a way to let it in. Because I know that being an open vessel to inspiration is anything but easy.

Luckily a little while ago this genius idea came to me of how to get my kids to do the things I want them to do and to get them to do it with very little effort on my part—super win! And I know the novelty of this sticker charts will most likely eventually wear off and I will be in need of some new inspiration of how to tweak and change it but for now . . . this idea is GOLDEN.

So let me share it with you and why it works.

#1. It is motivating: Once my kids fill up their whole sticker charts (which should take about a week) they receive not just one reward but three highly motivating awards:

#2. I never have to calculate anything so my kids actually get paid! I have historically been horrible at paying my kids when they finished their charts. Why? Because . . . math. There was way too much calculating involved. Now . . . it’s simple. It is always the same once they fill up the whole chart. And the sticker chart is separate from the list of things they need to do so if there is a day they don’t do one of the things on the list it won’t affect the count at the end.

#3. It has bonuses: My kids are seriously asking me if they can do extra things so they can fill up their chart faster.

#4. It keeps them from asking me for more screen time—even my three year old! My three year old's chart, and my older kids bonus chart, has things on it that typically would not be considered “chores” but the reason I put these things on is because I would much rather have them doing these kinds of things than watching screens. Things like:
·         Make something (legos, art, play dough etc…)
·         Play outside
·         Play with a sibling

#5. I easily combined behavior into the sticker chart. In the past it’s been such a nightmare trying to come up with a separate behavior system and keeping track of it all and finding ways to reward and discipline. Now I just made a list of all the good behavior that would get them a sticker and all the bad behavior that would make them loose a sticker. All done on the same chart.

#6. It's not overly complicated. I've been there. I've done that. I like making cute things, I do. But I also like simple things, and at least for now this is simple and plain, and I'm happy with that.

I laminated everything and then stuck them on the inside of one of my cupboards! (Except for the coupons...those are under lock and key. ;) 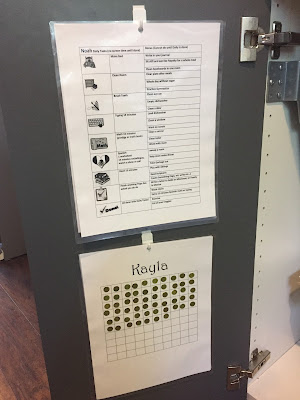 This is the link to the clipart I used for the charts ----->Job Chart clipart (It's adorable.) 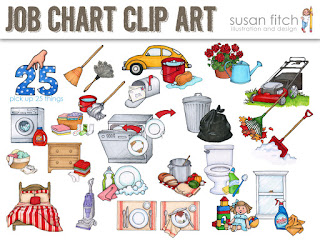 The first day I implemented this my daughter (who is notorious for dragging her butt through her chart . . . and is also notorious for sleeping in) woke up at 6:00 in the morning to get started!

And my cute little 3 year old can still be heard uttering the words "I can do it! I can do it!" As he makes his bed.

And all of this couldn't have happened at a better time--we are totally going to make it through the last few weeks of summer!
Posted by Jenny Sue Gamboa at 7:00 AM

Email ThisBlogThis!Share to TwitterShare to FacebookShare to Pinterest
Labels: Parenting