The edge of the rain

I experienced something pretty cool last Monday. I was driving home from our long school commute in the pouring rain. It was raining so hard that I was having a hard time seeing so I had to crank up the heat on the windshields and put the wipers on their full swishing power. I love the rain, but not so much driving in it. That day was interesting though because although it was dark all around me, I could see the edge of the rain in the distance where the sun was shining through and the skies were clear. As I drove on and eventually made it through that threshold I couldn't help but laugh out loud. It was such a sudden change. One moment I was in the rain and the next I was out. I turned off the windshield wipers and looked back--it was still raining behind me but where I was . . . it wasn't. Usually when I look up into the sky and see the rain it feels like it must be raining everywhere. It's hard to imagine that it just stops somewhere--like the edge of the earth if it really was flat like they used to think. 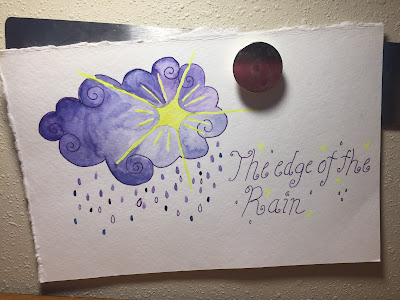 This experience happened the same day the shooting happened in Vegas and it felt like a metaphor for me. The shooting made me feel like hiding in a cave somewhere and never coming out again, but then I had to remember that even though the world may look so dark and rainy--that doesn't mean the world is all dark and rainy. My son asked me why the shooting happened and in anger I answered "Cause people are stupid and evil!" And he so wisely said back, "But not all people, right mom?" And he's right. It's not all people, it's not the whole world. There are edges to the rain, and breaks in the clouds. There is still joy. Individual bad people cannot take those things away from us.

And even though the world may be getting more and more wicked--that will not be the end. The end is going to be beautiful and God has given us rainbows to remind us of that fact. God will be victorious and merciful in the end. It will all be okay. And in the meantime I will look for those breaks in the clouds where the sun shines through and the rain ends.

Email ThisBlogThis!Share to TwitterShare to FacebookShare to Pinterest
Labels: Motivational